A croissant is a buttery, flaky, Viennoiserie pastry of Austrian origin, named for its historical crescent shape. Croissants and other Viennoiserie are made of a layered yeast-leavened dough. The dough is layered with butter, rolled and folded several times in succession, then rolled into a sheet, in a technique called laminating. The process results in a layered, flaky texture.

Crescent-shaped breads have been made since the Renaissance, and crescent-shaped cakes possibly since antiquity. Croissants have long been a staple of Austrian and French bakeries and patisseries.

Uncooked croissant dough can also be wrapped around any praline, almond paste, or chocolate before it is baked (in the last case, it becomes like pain au chocolat, which has a different, non-crescent, shape), or sliced to include sweet or savory fillings. It may be flavored with dried fruit such as sultanas or raisins, or other fruits such as apples.

In France and Spain, croissants are generally sold without filling and eaten without added butter, but sometimes with almond filling. In the United States, sweet fillings or toppings are sometimes used, and warm croissants may be filled with ham and cheese, or feta cheese and spinach. In the Levant, croissants are sold plain or filled with chocolate, cheese, almonds, or zaatar. In Germany, croissants are sometimes filled with Nutella or persipan; in southern Germany, there is also a popular variety of a croissant glazed with lye (Laugencroissant). In the German-speaking part of Switzerland, the croissant is typically called a Gipfeli; this usually has a crisper crust and is less buttery than the French-style croissant. 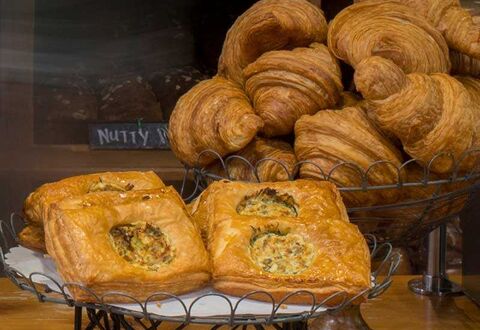